This guest post on Toms as a terrible travel shoe is brought to you by Melissa Shearer who wanted to share her thoughts on the subject. This post was originally posted in 2012 but has been updated in 2020.

Sometimes you just have to play devil’s advocate.

While I do agree that Toms are extremely comfortable, so-ugly-they’re-cute, and the money spent on them does support a good cause, I can’t help but disagree with Caroline’s post about why they make great TRAVEL shoes.

Don’t get me wrong, I absolutely adore my Toms – I have three pairs of them – two that are living in a closet somewhere in my parents’ house on the other side of the world, and the one pair I brought with me traveling. You see, I too, once thought they’d make a great travel shoe – that was until I started traveling with them on my feet.

No, literally, they stink. Toms are meant to be worn barefoot, but if you make the mistake like I did with my first pair and don’t buy insoles to put in them, within a week or two (and even sooner if you’re walking in the rain) they become so smelly that everyone will be well aware of you entering a room.

When I found myself with a perfectly good pair of shoes- minus the odor – I went back to the store where I bought them and asked if they could be thrown in the washing machine. NOPE. Apparently the dye can run, and the glue that is used has disintegrated in washing machines.

I was advised that I should have bought a washable terrycloth insole, which could then be hand-washed every few days. Seems like a lot of effort for the average backpacker.

My traveling Toms have long since been reduced to puttering-around-the-yard or biking-to-the-corner-store shoes. I wore them into the ground. I don’t think I’ve ever worn through a pair of shoes to the point of having holes in the toes AND heels at the same time.

I wasn’t even doing anything crazy with them on – simply walking around, exploring Sydney. These shoes are not at all durable.

3. Only Affordable in North America

At $50 a pair in North America, I found them to be somewhat reasonably priced, especially considering they donate a pair to children who are without. (2020 Update – They have changed their giving model to give away $1 for every $3 they make)

When I wore through my traveling pair in Sydney a few weeks into my yearlong round the world trip, I went Toms-hunting and found that they retail for about $80AUD!

Good cause and comfort or not, there was no way in hell I would be buying them on foreign soil.

Toms, by design, do not have extraordinary grip. In fact, they have little-to-no tread on the bottom – which in most circumstances is perfectly fine.

However, I found that in Sydney (sorry I keep referring to my time there) when it rained, the sidewalks would become hazardous! If it weren’t for my 15 years of figure skating training, I’m sure I would have ended up on my butt – most likely in the biggest puddle known to man.

On smooth surfaces (such as rained-upon Sydney sidewalks, or freshly waxed floors) Toms can become dangerous footwear – and the older and more worn in they are, the less tread they will have, thus making walking on such surfaces risky business.

As I mentioned at the beginning, I am not denying that Toms are super comfortable. I thoroughly enjoyed wearing them on my flights, and still enjoy wearing them despite the holes through the toes and heels – I simply believe it is unrealistic to think that they are good shoes to travel in.

Besides, I’m much more of a Havaianas kinda girl!

About the author: Melissa Shearer was born and raised in Toronto, Canada. She was bitten by the travel bug at a young age, thanks to annual family vacations to Disney World. Since then she has been to nearly twenty countries and is currently on a round-the-world adventure. As a 20-something with a penchant for adventure, Melissa doesn’t shy away from anything – she’s skydived, bungee jumped, and gone on culinary conquests – eating random delicacies from around the world including kangaroo, jellyfish and crickets. Melissa shares her adventures and love of travel over at The Mellyboo Project where she hopes to infect others with the travel bug. 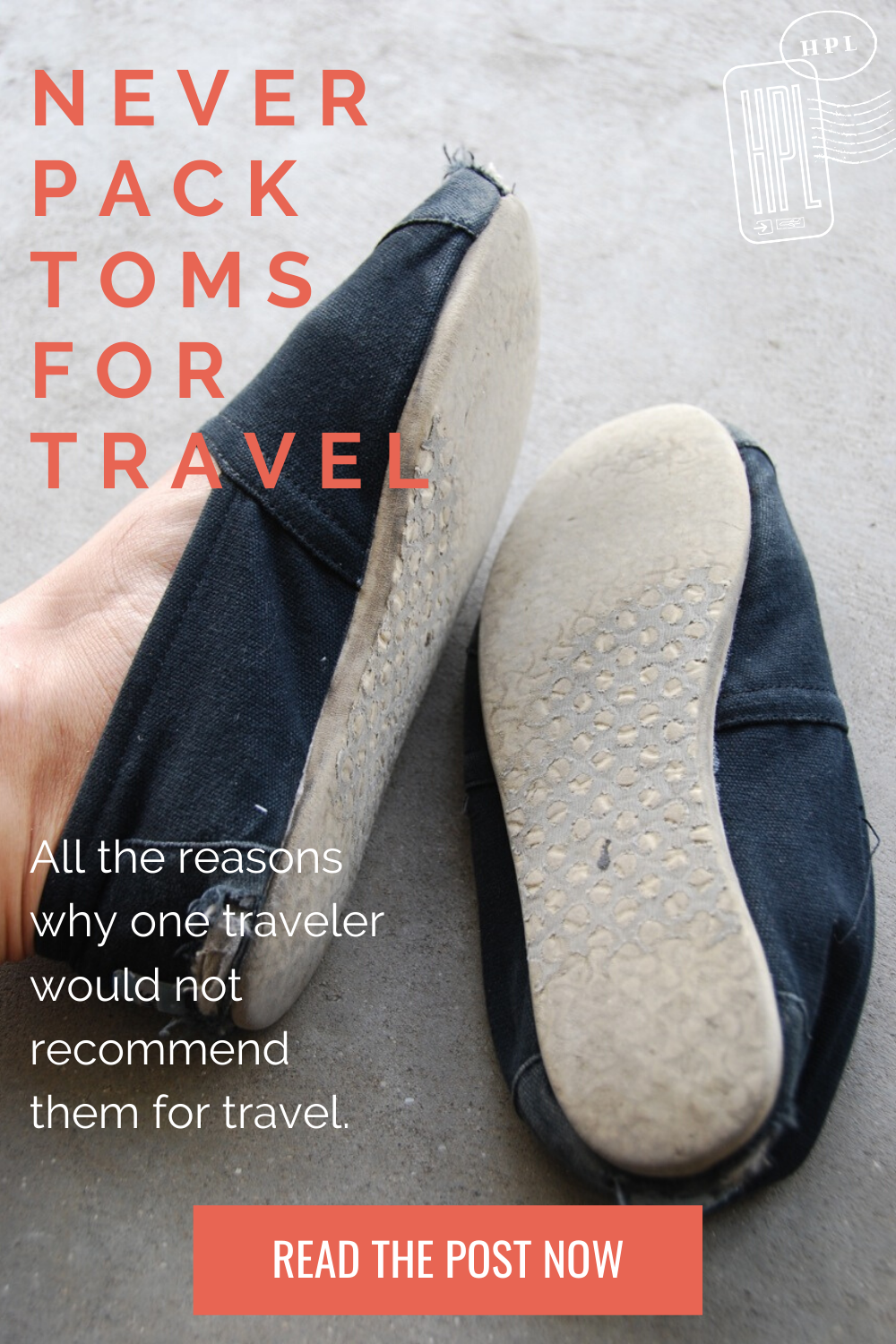