Travel days, while being joyous occasions when we get to set off into an adventure or relaxing getaway, more often than not can also be days of utter stress and confusion. The whole getting to the airport on-time when traffic is at a stand-still, or your train is running 30 minutes late, can be enough to make your blood pressure rise and the adrenaline start pumping.

And if that wasn’t bad enough, the last thing you want to hear when you finally get to the check-in counter is that your bag(s) is (are) overweight and you need to either:

1) repack and reorganize to make it all work, or
2) pay an extensive overweight fee, or
3) both!

Yes, you’ve seen them. The girls (and guys) who are frantically opening their luggage on the airport floor, shifting this and that from one bag to another and hoping it all pays off in the end.

In fact, you might even be one of them. According to our recent Her Packing List survey, dozens of ladies have had to open up backpacks and suitcases at the check-in counter for all to see, and it’s never a fun experience.

Does this sound familiar?

In full view of a line of people…
“When I flew back to the UK from Auckland in June my suitcase was overweight and if I hadn’t been able to take my winter coat out of it and put it into my almost empty hand luggage I would have had to pay $200NZD to take my bag as it was! Thankfully I rolled up the coat and packed it in my carry on instead, although having to unlock and rummage through my suitcase in full view of a line of people wasn’t a great experience!” -Beverley Reinemann

Transferring my underwear from one bag to…
“On the way home from a high school summer study program in England, my bag weighed too much. I kept asking the woman who weighed my bag how many pounds it was – obviously she kept telling me how much it cost in pounds to get my overweight bag on the flight. Imagine my 16-year-old embarrassment transferring my underwear from one bag to another in front of the rest of my high school group. I’ve never had an overweight bag again though!” -Leidy Wagener

Each bag was still overweight…
“I was on my way back home from a year in Scotland. It’s amazing how much stuff you can accumulate while being stationary for a long period of time. Even though I had purged quite a bit before I packed up, BOTH of my suitcases were overweight. So much so that they wouldn’t even accept them on the flight. So I had to open them up and start throwing away whatever I decided I could part with right then. And then each bag was still overweight and I had to pay $400 dollars to get them on the plane. It was very embarrassing and hard on my bank account!” -Ashley Curd How to Make Repacking at Check-in Less of an Issue

If you’re the type of person that finds they are constantly repacking their luggage at the check-in counter, and you don’t think that will change in the near future, alleviate your stress by making a few adjustments.

First, pack all your items into packing cubes and organizational units (pouches, sacks, etc.). That way, if you do need to shift things around in front of every other person in the airport, you will at least be able to do so without your underwear strewn across the floor.

Second, bring a collapsible duffel bag. If you literally can’t fit your shifted items into your suitcase or carry-on, perhaps putting it all into a duffel with extra space to kill will do the trick. This is assuming you are limited on space and not weight of one of your items.

Third, always have extra cash on you to pay for your excess baggage fees. Not every repack will solve the problem, and you might not be able to part with what you have at the last minute. In that case, excess fees are usually necessary.

How to Eliminate This Packing Nightmare Completely

Of course, we don’t want you to have to deal with this packing nightmare at all! Yes, Her Packing List can help.

In just a few short weeks, we’ll be releasing our very first packing ebook that can take you from packing disaster to packing master in no time. The stress and embarrassment of needing to repack at the check-in counter is just one of the packing nightmares you’ll be able to leave behind.

UPDATE: We have since released our packing ebook!

It’s our goal at Her Packing List to have you packing and traveling stress-free on your next holiday.

Do YOU have any good repack-at-the-check-in-counter stories to share? Is this a packing nightmare you struggle with constantly on your travels? 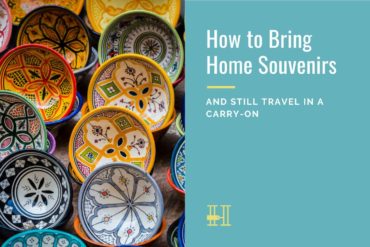