This post was originally written a few months after J arrived in Malawi. We have updated the post with follow-up notes in May 2017 after the completion of her 15 months abroad.

I arrived in Lilongwe, Malawi in January 2016 to begin a one year volunteer placement with a local organization. Before leaving I poured over blogs and travel books. I created a customized packing list after compiling several lists found on websites, in books, and from friends. If you accused me of being detail-oriented, I would plead guilty.

My placement had me working in an office in Lilongwe and also doing several field visits. Within the first few months of arriving, I lived in four different ‘homes’, gone to the field several times, and done some weekend trips.

I didn’t stay in hostels or move around every night, I properly lived in Lilongwe for 15 months, so, keep that in mind when reading and assessing what will work best for however long you’re expecting to visit/live there for.

Hot season lasted from October to December. And it was really hot. And even if you have air conditioning (which I didn’t) it doesn’t do you much good when there are power cuts (which happens daily in the hot season, in some parts of the city you can go several days without power).

In January it was still very hot, but the nights would cool down. However, after sun-down you worry about mosquitoes giving you malaria, and it’s rare to see screens in windows. If you’re heading to this part of the world get ready to be hot a lot of the time (especially October – March), and expect to get wet… though climate change has affected the rainy season which used to be much longer. There were daily rains in January/February, but they were far less frequent than older guidebooks led me to believe they would be.

So far the weather notes probably haven’t been much of a surprise. Something a friend told me about prior to coming was how cold it could get. Throughout the year the days would get pretty warm, but in the evenings (June/July especially) I would sleep under a blanket with heavy layers and socks, so, don’t skip out on the sweatshirt. I ended up borrowing one from a friend because I hadn’t brought enough warm layers!

In addition to power cuts, water cuts are also common. Again, it depends which part of the city you’re in. Some properties have back-up water tanks and generators but the whole thing is a hassle.

I wanted to share a list of my Malawi packing list essentials that I’ve found particularly useful during my time on a new continent to be of help to fellow (over)-planning travelers. Some items on this list are named with no explanation (they are found on most packing lists and their usefulness is undisputed), while a bit more explanation is offered for others.

It wasn’t so long ago that Malawian women were not permitted to wear trousers. This is no longer the case, but women generally dress more modestly than in my home country (Canada). That being said, plenty of women wear skirts/dresses that are knee length, and tank tops are common. I’m told that foreigners can ‘get away’ with wearing things that would be inappropriate for locals – however, the recommendation is to follow suit (though accidental missteps may be overlooked). If you’re coming to work in an office, bring office-wear. There’s a business casual dress code at most offices in the city and while it’s not as formal as home, you’ll want to present yourself well.

This list was originally written after a few months in Malawi. J has now updated her list with notes after completing 15 months abroad.

The photo above shows the luggage I brought with me. The best type of luggage for you will depend on what you will do while travelling. I did not use my large hiking backpack NEARLY as much as I thought I would. Instead, I borrowed suitcases and used weekender bags. The large red suitcase was only used for the trips to-and-from home (Canada).

Other things to pack for Malawi

Not something you pack, but please be mindful of your safety AT ALL TIMES. People have had phones stolen out of their pockets, cameras taken from bags, and suitcases disappear in the middle of the night. Pickpocketing on the street was uncommon in Lilongwe, but going deep into dense market areas puts you at a higher risk. Also, walking in Lilongwe outside after dark is absolutely unsafe. Would also strongly recommend arranging for a pick-up at the Lilongwe airport prior to arriving rather than hiring a random taxi driver (the airport is far from the city).

Wishing you many fun and successful adventures to wherever the spirit moves you!

About the author: J is experiencing her first extended trip away from Canada to volunteer with a national Malawian organization. She loves food, planning, and figuring out how organizations work. She does not love being patient (see last item on the list).

I Want This Checklist!
Pin thisShareTweet
Add your voice & leave a comment! 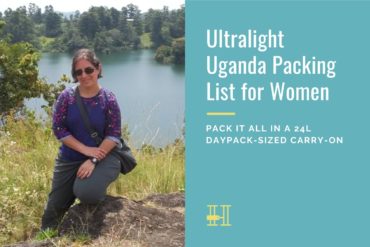