The following guest post has been submitted by Taylor Brown.

Whenever I get ready to embark on an international adventure, my top priority after tickets is letting my bank and credit card company know I’m going abroad. My bank asks for a list of cities traveling to along with the dates. One would think that they would be well prepared for you using your card internationally, or if your card wouldn’t work in that country they would be kind enough to give you a heads up. This was not the case with my stay in Budapest. I was stranded for four days with 2,305 Hungarian forint, which is about 10 US dollars or 8 Euros.

Last December I embarked for almost a month of travel in Europe. My first 10 days was smooth sailing. I had no problem with ATMs or shopping in Madrid, Murcia or Barcelona. So I did what I normally do at an airport – I buy a cup of coffee to try and rid myself of extra cash. I used to have a huge aversion to carrying extra cash with me on my travels. I had about 12 euros when I took off to Budapest, which was a low enough number for me to deal with.

I was set to couch surf with Martin, meaning I was lucky I didn’t have to worry about paying a hostel bill. I had also packed gifts for my hosts before leaving home, so the only thing I was budgeting for was food, airport transfers, and souvenirs.

That budget went to hell when I got to the ATM and tried to make a withdrawl. My card was declined and spit back out at me. I rolled my eyes and went to the exchange desk, but it was declined there, too.

That’s when I panicked.

Lucky for me a ticket to the city centre on a combined bus and metro ride cost me 465 Forints, or about 2 US dollars. My penniless adventure started when I walked out of the metro station into the centre of Budapest. It was winter so it was freezing and I had eight hours to kill before I met up with Martin and his family. I walked around and ate a cereal bar for lunch. When I travel I always pack cereal and protein bars in case of an emergency; Budapest qualified as an emergency.

When I got in touch with the bank that night, they told me it had been fixed and that my debit card should work just fine the next morning. I was happy and cheery and thought everything was perfect. I realized it would be smart to get a 72 hour travel pass, which would let me ride public transport as much as I wanted, and I used my credit card to buy it for just $20. This shut down my credit card. I ended up not bothering to sort it out and just went the rest of my trip without that card.

While I was out sightseeing, I thought a cup of coffee would warm me up nicely so I swung by an ATM… debit card declined. Thanks bank. There went my excuse to sit in a coffee shop and warm up. On the bright side I had my travel pass and the 4 and 6 line trams were heated. When I got cold I’d just hop on a tram for a bit. Again lunch was a cereal bar and lots of water. Dinner was the same deal.

To Make a Long Story Short

No matter how many times my bank told me my card was okay to use, it wasn’t. The guy working with me was really nice and did everything he thought would work but I was still stuck and hungry. The most depressing part for me was the fact that I love foreign currencies, and Hungary was the first country I’d been to that didn’t use the Euro. My original 2,305 Forints were used VERY sparingly since I was determined to bring extra money home. The third day I was so proud of myself for spending virtually no money that I rewarded myself with Hungarian treats from Spar. I splurged – 348 Forints, or $1.51.

The last night I went on a river cruise with Martin and his family, and guess what – my card was finally working! That was a pleasant surprise. The bummer part was after the cruise when I went to find wifi and food and was only able to find a McDonalds. The less bummer part was that they have some really odd burgers on the menu, so I ordered one of those. I’m convinced the ATMs in Hungary hate my card because I was never able to withdraw cash; I had to use it like a credit card at shops. My last day in Budapest I only had a few hours to see the rest of the city and buy postcards before heading to the airport. I left the country with 732 Forints.

My bank card worked fine at the ATM in Brussels. Food was my first goal, and what a good city to binge eat in.

Moral of the story?

Since this little mishap I’ve gotten over the fear of having a lot of money in my wallet. I’ve been backpacking twice since January and it’s now my policy to carry a hundred dollar bill stashed away in my bag.

I picked a hundred as my ideal bill to have because, let’s face it, $100 will convert into a decent amount of cash in most countries. I figured it would cover hostel bills, airport transfers, public transport, and food for a few days. That time would tide me over till I figured out and fixed the issues with my cards. So, I now have a special place in my backpack that houses my $100 cash when I leave the country, and I think everyone should do the same.

Do you have any stories of bank dramas overseas? Do you try to pack emergency money?

About the Author: Taylor Brown is a senior in University and a Lightworker. She’s lived in three countries. Explored three continents. And still has a full list of adventures to have. Taylor blogs about her travels and other life adventures on The Vangclear Files.

*All photos except title photo by Taylor Brown. 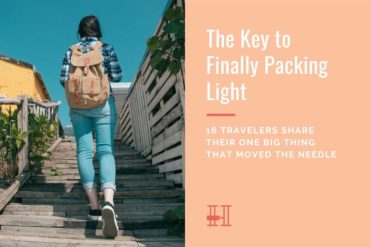