The following is a guest post from Renee King as part of our Kindle Review Month here on Her Packing List!

As the former owner of the Kindle 3, I have to say that I was quite devastated when mine was stolen.

I had come to depend on it as my personal library; a small depository that held all of the literary wonders that served to shape me as a human being. Previously, I had lots of paperbacks and hardbacks strewn throughout every possible cubbyhole of my house and had to make the awful decision to donate them so that I could reclaim some sense of normalcy again.

One day, I heard that Amazon was revamping the original Kindle. This time around it would not only serve as a way to catalog your books, but you would now be able to surf the internet via a browser, utilize their new text to speech capabilities, enjoy a longer battery life, more storage, view your books in landscape or portrait orientation, use the built in dictionary, adjust the text size and you could listen to your downloaded music. At the time, it was a phenomenal upgrade! In fact, I was so impressed, I wrote a review of it on my travel blog!

Naturally, technology is ever evolving and Amazon is always thinking of ways to improve their flagship invention. Fast forward a year later, when their newest iteration of the Kindle is announced, the Kindle Fire. This was around the time that someone decided they needed my Kindle 3G more than I did. There was no question that I was going to replace it, but now that they were introducing a new model, I had to make a decision.

As soon as I learned about the Fire’s amazing features, there was no question that would be my replacement. In my opinion, there’s not even a contest between the Kindle 3G and the Fire. As much as I enjoyed the former, it was little more than an electronic reader that allowed you to surf and listen to music. The Fire was different because it took into account the reality that most technologically savvy people, especially travelers, demanded a plurality of services in one convenient unit.

You can put apps on it, you can watch tv shows and music, you can write to your heart’s delight, play games and music as well as read magazines, newspapers and books on it. The best part is that you do not have to deal with the prior version’s clumsy keyboard or having to advance or go back by clicking arrows because the Fire operates via touchscreen. The Fire’s screen is an inch larger and doesn’t require the aid of a booklight in order to read the e-ink in the dark since the LCD screen has a backlight. Truthfully, the only thing that I miss about the kindle 3 is the 3G feature because my Kindle Fire lacks the ability to surf at will, you must have wi-fi available. Another great feature is the Cloud. You can store your books, music, apps, magazines virtually via their Cloud storage. The Kindle Fire unit comes with 8gb of storage (up from the previous model’s 4gb), however, the cloud allows you to store everything that you’ve ordered from Amazon for free. You can import your previously owned material to the cloud as well.

Instead of the ‘table of contents’ styled text listing of your books, the fire displays them in a colorful carousel of covers that you can select as they whirl by. The last app, book, magazine, song that you’ve accessed will always show up on the home page for easy access. At the top of the home screen, you will see tabs labeled:

Newsstand – stores any magazines or newspapers that the owner has subscribed to. Usually in the form of an application that can be downloaded from the Amazon App store or Google Play or digital versions provided by the publishers themselves upon subscription. Books – any books that were purchased from the Amazon store will show up here. You can also import books that you already own. The books are displayed front forward as if sitting on a bookstore shelf. A tap of the screen will launch or open each book. To view the entire library, simply touch the screen and scroll down. Music – allows you to create playlists of the music that you’ve purchased or previously owned. You can sort music by artists, albums or song. You can easily order more music via the Amazon store under this tab.

Video – This interface allows you to purchase single episodes or entire seasons of tv shows or to rent movies that were released on dvd. Amazon video is a popular feature for those who have fired their cable companies and rely on streaming tv instead. Members of Amazon Prime can view another tier of movies for free. Any videos that you have purchased can be stored under the Library section of this tab. Docs – You can store documents like PDFs under this tab.

Apps – The apps are displayed in much the same way as the books, forward facing on a bookshelf. The kindle supports android apps and Amazon offers one free paid app every single day for Kindle Fire owners. Web – operates on cloud accelerated browsing via Amazon silk; click on the tab and the browser opens automatically. With the 3g version, you had to go through several steps just to reach the experimental browser. Easy to bookmark as well. With the exception of the web, each of the above tabs would allow you to view your media via device storage or cloud storage. In order to view cloud storage, you would have to have access to w-fi. You can view device storage at any time, with or without wi-fi access. You can instantly download cloud stored media to your device when logged onto wi-fi; then you can enjoy access unencumbered. Since you are limited to 8 gb of storage on the device, it is wise to store as much as you can on the cloud.

As of this writing, Amazon has announced the launch of the Kindle Fire HD! New improvements are:

All of these improvements are tempting, but I plan to wait until the inevitable drop in price before I upgrade. Plus, it will be nice to see what else they may add in the way of features.

>> Learn more about the Kindle Fire on Amazon, or read other Kindle user reviews right here on Her Packing List!

* * * * *
About the author: Renee King is an administrative assistant by day who spends most of her waking hours plotting the next excursion to anyplace outside of her zip code. She manages to entice her daughter, Carisa, to accompany her as they are thrilled to view the world on a budget and share tips so you can too. Read about their adventures and how they manage to “sample the world at a fraction of the price”. Check out her blog at A View to a Thrill, or follow on Facebook or Twitter. 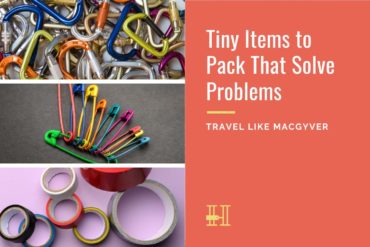