Putting those normal bath towels you use at home on your packing lists is a big no-no.

Being big, bulky, and slow to dry makes them terrible for travel. The last thing you want to do is have to pack up a wet towel into your luggage. On arrival, there’s bound to be a musty stench to deal with. Yuck.

To combat this problem, we’ve typically recommended the pack towel, but that option also has its downsides. Most are barely big enough to wrap around your body, some tend to pick up a musty scent after so many uses, and the feeling of the shammy-like material on your skin isn’t always smooth.

But, we thought this was the best option, the best travel towel, until…

Why the Best Travel Towel is a Turkish Towel

Are Turkish towels good for travel? You better believe it! While there are still times when that tiny microfiber pack towel serves a purpose, the HPL team generally ALWAYS recommends a Turkish towel when traveling.

But if you’ve never heard of them before, you’re probably wondering what the heck they even are!

What are Turkish Towels?

Fellow traveler Camille already told us that Turkish towels are her one little thing she can’t travel without, and I have to be honest, I became an instant convert after Knotty (an Australian brand) sent me a few to try out for myself back in 2015.

Known as peshtemals, Turkish towels were originally designed for use in public bath houses. In recent years, they’ve grown in popularity as beach/pool towels, travel towels, and even as gym towels (I take mine to the gym!) thanks to their large size, high absorbency level, and quick-drying nature.

But most of all, we love their ability to be packed down quite small – almost just as small as those teeny tiny pack towels you get at the travel gear shops!

So let’s take a look at why Turkish bath towels are perfect for travel:

They’re thin. Even though they are cotton (which is not typically on our quick-dry clothing and travel gear list), they dry fairly quickly.

They actually cover you up. The size is not even comparable to pack towels, but since the material is thin, they still pack up small.

They’re soft on your skin. Unlike the sticky feeling of other pack towels, like my old faithful from Kathmandu, Turkish towels pat down more like a normal towel given the fluffy thread of Turkish cotton.

Absorbency is high. All thanks to Turkish cotton.

The Turkish Towel vs the Travel Towel

I received my first Turkish towels from Knotty here in Australia. The extra large size of their Turkish towels (100cm x 180cm / 39in x 71in) puts my old, large microfiber towel from Kathmandu to shame (it comes in at a measly 50cm x 96cm / 20in x 38in).

However, the only place where the pack towel still has the Turkish travel towel beat is in weight.

Sure it’s only 122g more, but for those who see the benefits of packing ultra-light, you will want to make sure you have chosen a towel that can double as a scarf, or even work as a blanket on a plane.

My Knotty’s towels make for bulky scarves, but there are thinner and slightly smaller Turkish towels on the market if you’re willing to put in the time looking.

Many Uses of Turkish Towels While Traveling

Now let’s have a look at all the different uses of a Turkish towel. (Note: You can imagine these being just as useful in your daily life!)

How to Wear a Turkish Towel

1. Scarf– Because of the size, it makes for a large scarf, so you may have to loop it around a few times. There are so many ways to tie a scarf, so do some research on Pinterest. I did the simple wrap around, but you could also do the knot or loop. Be warned that because of the rectangular shape, you may have some extra fabric that makes certain scarf styles look a bit silly.

2. Blanket scarf or shawl– Wrap around your shoulders to keep you from getting chilly on a night out or, if you’re more ambitious, treat it like a blanket scarf. I laid the towel on my shoulders like I was going to wear it as a shawl, but once the ends reached my armpits, I tied a knot behind my back. Use these styles to cover your shoulders when entering a conservative site like a church or temple.

3. Bag– You may have to play around with it before you get it right, as I did. Tie edges of the middle together length-wise (hot dog style) before tying the longer ends together (hamburger style). I don’t recommend wearing your scarf as a bag if you’re carrying important things like your camera and passport, as it might slip out or hands might grab it, but is fine for going to and from the beach.

4. Sarong/dress– While almost as versatile as a sarong, a Turkish towel is thicker than the materials used on sarongs. Therefore, it may not be as flexible for tying. But I did manage to turn my towel into a dress. I wrapped both ends around me and crossed over to tie around my neck. It’s a bit short, so I wouldn’t wear it out much beyond a quick lunch or beach day. But you can even belt it to make it more flattering or pair with leggings for additional modesty.

5. Skirt– To use as a cover up, simply tie in a big knot at your hip and leave the slit. But I chose to turn my Turkish towel into a skirt I could potentially wear out as an additional clothing item. I took one end to my waist and then wrapped the other end on top of it, tucking it into the top when I reached the end. I then folded over the top for extra security. This is also great to carry in your bag if you need to quickly cover your legs to visit a temple or other holy site.

6. Head covering– Another essential style is the head covering, which you may need when traveling to certain countries. You’ll be required to cover your hair when visiting temples and mosques so it’s nice to be able to throw the Turkish towel into your bag and keep from being denied entry or forced to wear the full body robes they often rent. I took the middle and placed it over my head and wrapped each end around my shoulders.

Where to Buy Turkish Towels 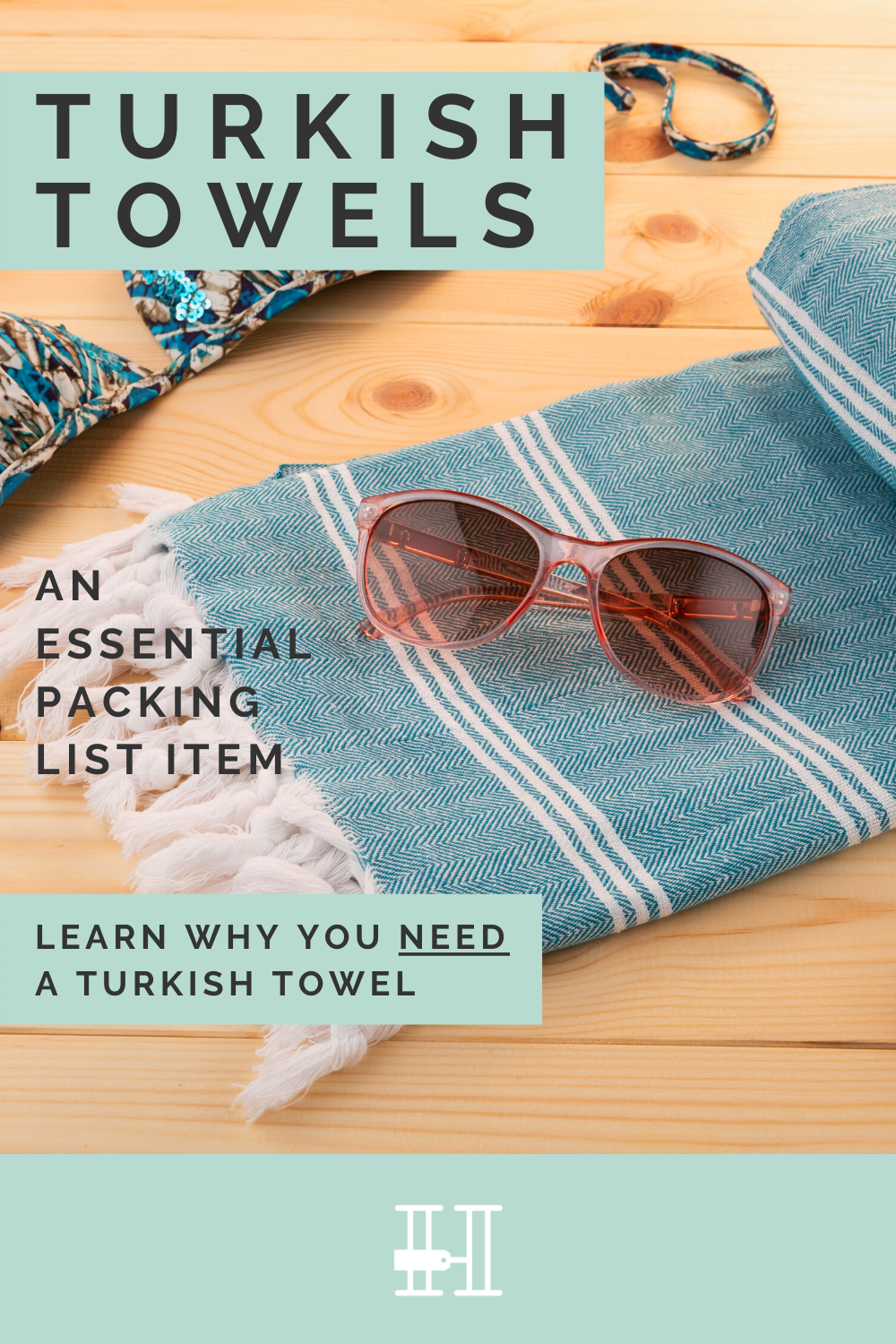 I run the show at Her Packing List and love packing ultralight. In fact, I once traveled for 3 entire weeks with just the contents of a well-packed 12L handbag. When I'm not obsessing over luggage weight, I'm producing episodes of The UnPacking List or just snuggling with my pet rabbit, Sherlock Bunz.

The Perks of a Travel Mug